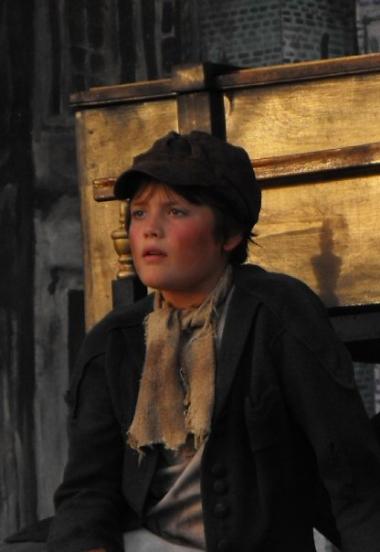 Next weekend Clear Space Productions are going to performance in Dover its new production Oliver! at Schwartz Center for the Arts in Dover on Saturday, August 1 at 7:00 p.m. & Sunday, August 2 at 3:00 p.m.

Oliver! tours has had a big successful last two weekends. Oliver! tours began to play July 16 and next weekend will be the last opportunity to see Oliver! “at the beach”.

The play re-create London in 1850 and follow the world’s most famous orphan as his life takes him from workhouse to funeral parlor to joining a gang of pickpockets. This musical adaptation of Dickens’ famous novel is filled by jovial, lively and odd characters as well as familiar and catchy tunes, including “Consider Yourself,” “Food, Glorious Food” and “As Long as He Needs Me.”

We want to tell you something else about Clear Space Production and the main actors of this play.

COLE HADEN (Oliver Twist) is 12 years old and attends Southern Delaware School of the Arts where he has performed as Michael in PETER PAN and Young Tarzan in TARZAN. With Clear Space, Cole has been seen in GOBLINS DON’T SCARE US! as The Wizard and in SCROOGE! for three years, recently playing Peter Cratchit. He has also participated in Broadway Bound, Broadway Bound On Tour, the Musical Theatre Summer Intensive, and takes voice lessons.

DAVID BUTTON (Orphan/ Artful Dodger) is a graduate of DeSales University who received his B.A. in Theatre with a focus on Acting and Directing. He is Company Manager for Clear Space and also teaches for the Theatre Arts Academy at Cape Henlopen. He has performed in the company’s productions of THOROUGHLY MODERN MILLIE, SHERLOCK HOLMES, HELLO DOLLY!, THE WORLD GOES ‘ROUND, SIX ROOMS, SOUTH PACIFIC, THE CRUCIBLE, NEW WORKS FESTIVALS, and SCROOGE!

DANA PERAGALLO (Nancy) is a graduate of the University of Delaware with a B.A. in English, concentration in Drama, and a minor in Chemistry. She has been studying theatre for over ten years and taken part in over 40 productions regionally and throughout her education. She is Community
Relations Director for Clear Space as well as a Faculty Member for the Theatre Arts Academy at Cape and the Clear Space Arts Institute.

DOUG YETTER (Artistic Director) has been in the musical theatre business for over 35 years as director, musical director, conductor, arranger orchestrator, and composer for hundreds of shows in dozens of theatres across the country. His works for the musical theatre stage include SCROOGE!, THE STREETS OF NEW YORK, CRICKET ON THE HEARTH, AROUND THE WORLD IN 80 DAYS, DRACULA, THE WATCHERS, DIVINE TERROR and an opera, THE SCARLET LETTER. Doug graduated Summa cum Laude from University of Maryland where he received his Bachelor of Arts degree in composition and holds his Master of Fine Arts degree from the Graduate Musical Theatre Writing program of New York University. Doug is a member of the Dramatists Guild of America, American Federation of Musicians, American Guild of Organists, and the American Society of Composers, Authors and Publishers (ASCAP).

HOY en Delaware could make an interview with some of the main actors of Oliver! And another very special person for our “Delaware’s Oliver”: his mother Kristin Haden.

(HOY en Delaware) Dana, you are BA in English, concentration in Drama, but you have a minor in Chemistry. Chemistry and Performing are activities very different, with which of both do you enjoy more?

(Dana Peragallo) They are very different … I was actually headed to Pharmacy School prior to accepting a full-time position with Clear Space. The Performing Arts are my number one passion.

(HD) What are your feelings about the production Oliver! and about your role in it?

(DP) I absolutely love my role in OLIVER! The rehearsal and touring process has been such a joy for me. It is such a privilege to be able to work with such talented actors and such a genius Creative Team.

(HD) Why did you decide to organize a social ice cream for people after performing last week-end?

(DP) Clear Space usually tries to tie in an event after a performance where the audience members have an opportunity to meet with the cast and Creative Team. For this show in particular, we wanted to tailor the event to younger children (with the show being family friendly). It was really great to be able to meet the kids afterwards.

(DP) Yes, most definitely! I have received a lot of positive feedback from the show. Ken Skrzesz, Director and Choreographer, is so amazing at what he does. The show is really fantastic.

(Hoy en Delaware) You are in this business over 35 years. Is any of the plays that you participate, special for you? Is Oliver! a special play?

(Doug Yetter) Oliver has certainly been a favorite for many years. I sang two of Fagin’s songs in a show when I was 17 and vowed I would play the role when I was the right age.

(HD) At last time John Marino (the actor who performed as Fagin) was suddenly ill. You assume his role. How do you feel in his role?

(DY) I wish that I hadn’t had to play the role under the circumstances! (Remember that the actor who portrayed Fagin in the cast came down with pneumonia, so Doug Yetter, Artistic Director of Clear Space and Musical Director for the production, was asked to take his place). John would have been terrific in the role. As I said above, this is a role I’ve wanted to play for 35 years, but knew that there was still plenty of time for me to play the role later in my life. I had decided to just be Musical Director for the show and play piano, but John took ill and I knew I could learn the role quickly. I can’t say that I’m equally at ease behind the keyboard as I am on stage, but the role felt like putting on comfortable clothes and I’ve enjoyed my time as Fagin.

(HD) Is difficult to direct yourself?

(DY) Luckily, I didn’t have to direct myself and have tried to avoid that situation! Ken Skrzesz is the director for the show.

(HD) Why would you encourage to people to go next week-end to Dover to see Oliver!?

(DY) It’s a terrific production of a classic, with a dozen songs that stick in your brain – for good reasons! The cast is wonderful and really give everything in this show.

(DY) The Production Team, cast and musicians are exceptionally strong for the show. Everyone is a master of their craft – Deb Rhoads has made incredible costumes, Eric Wallen has provided the best “sets” we’ve ever had, Melanie Bradley is an accomplished musician and leads the small orchestra diligently, and the whole cast is brilliant.

(Hoy en Delaware) Cole, How do you feel in the previous moment to begin your perfomance?

(Cole Haden) Usually, before the performance I am getting into character by having conversations with the other actors about that time period and my character. Once the overture starts for the show I get so exited because I know it will be another great performance.

(HD) You are very young but you have a big background in the world of theatre, what are your goals about it?

(CH) My goal in theatre is to definitley be on Broadway, but before I would like to go to college and get a degree in musical theatre.

(HD) What do you like to do when you were an adult? Do you like to perform in films in Hollywood for example?

(CH) I have many options to choose from, but right now I feel like I would love to be on stage and in New York for the rest of my life.

(HD) Was very hard to prepare your role as Oliver?

(CH) The hardest part of preparing for my role was finding my character. Once I found it really was not hard at all to prepare for my character.

(Hoy en Delaware) How do you feel about Cole?

(Kristin Haden) I am so incredibly proud of Cole. He loves theater and it shows when he performs. He just makes me smile when he’s on stage. He’s happy and that makes me happy.

(HD) Does your family enjoy with theatre?

(CH) We don’t have a lot of artistic background in our family so Cole has shown us a side of life we may never have known if it wasn’t for him. Our interest in theater has grown because of Cole and our family truly enjoys going to all kinds of performances.

(HD) Why Cole want to be actor?

(CH) I think Cole enjoys acting because he is able to express himself so easily through acting, dancing and the stage. The theater is where he is the happiest and that is the most important thing.

(HD) Does he work hard to become a famous star?

(CH) Cole is one of the hardest workers I know. He creates very high expectations for himself and follows through. He is very receptive to criticism and greatly respects Ken and Doug (the directors of ClearSpace Productions). He will strive to be the best performer that he can. We are so proud of him.

It would be unfair not to mention the rest of the actors who performs in Oliver!. All of them are a big team who make possible this play: Cheryl Graves, Jan Glasscock, Triever Sherwood, Gianna Abboud, Paul Colucci, Zane Ellis, Meghan Hayward, Stephen Mervine, David Button, Jerry Birl, Lorraine Steinhoff, Dick Pack, Valorie Jarrell, Craig Porter, Corey Barto and Deb Rhoads, Costume Designer who made a big effort to prepare all costumes,Eric Wallen provider of the best “sets”, Melanie Bradley who leads the small orchestra, and of course Ken Skrzesz who is the director for the show. To all of them: Congratulations!

Remember: Clear Space Productions will perform Oliver! at the Schwartz Center for the Arts in Dover, Delaware at 7 pm on Saturday, August 1 and at 3 pm on Sunday, August 2. Tickets are $25 for adults, $22 for student, senior and military and $12 for children 12 and under.

For more information or to reserve tickets, please visit the website at @link href=’http://www.schwartzcenter.com’target=”_blank”>www.schwarzcenter.com/link or call the Box Office Monday through Friday, 10 am to 4:30 pm at (302) 678-5152. Advance sales are encouraged.