The students of the Theatre Arts Academy at Cape High School will perform Oscar Wilde’s classic comedy of manners, THE IMPORTANCE OF BEING EARNEST, from Thursday, November 12, through Saturday, November 14, at 7 p.m. as well as on Saturday afternoon at 3 p.m. Tickets are available at the door and are $5 for students and $7 for adults.

The students of the cast have at least two years of acting training through the Theatre Arts Academy. They have been rehearsing for the show since the beginning of the school year, trying to capture the comedic timing that Wilde places so cleverly within the text.

“The show is a ton of fun,” said cast member Katharine Ariyan. “His [Wilde’s] writing is really amazing and the process of bringing it to life has been so great.”
THE IMPORTANCE OF BEING EARNEST, through witty banter and larger-than-life characters, tells the story of two men hoping to marry the women of their dreams, but who first need to overcome the creation of their alter-egos. Through this process, they, as well as the women, come to realize the vital importance of being earnest. Ashley O’Donnell summarized, “EARNEST is a great story full of hilarious characters and many twists and turns all leading to a happy ending.”

The performances of EARNEST will mark the debut performance of the Theatre Arts Academy at the brand new theatre of Cape Henlopen High School. The stage will be set with a center platform and intimate seating surrounding the actors on three sides. Costume Designer, Deb Rhoads, has designed and constructed period costumes fitting England, 1895, for every member of the cast.

THE IMPORTANCE OF BEING EARNEST is being directed by Clear Space Performer and teacher, Dana Peragallo. Dana has been in over forty productions regionally and throughout her education and teaches with the Theatre Arts Academy and the Broadway Bound programs. Dana commented, “The students are incredibly talented and have brought this amazing piece of work to the stage through phenomenal characterization and physicality. These young actors have truly achieved a new level of professionalism in this process.” She concluded, “Come to the theatre for a fantastic evening of fun and laughs.”

THE IMPORTANCE OF BEING EARNEST will be performed, Thursday, November 12, through Saturday, November 14, at 7 p.m. as well as a Saturday Matinee at 3 p.m. Catch a performance amidst the shows of the Rehoboth Beach Film Festival! 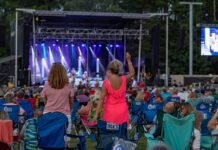