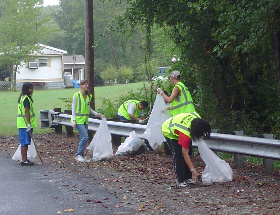 Cadets and other volunteers cleaned some of the most littered portions of Patriots Way south of the railroad tracks and extending to Route 113. Volunteers collected approximately 40 bags of garbage, not including automobile tires and other large items.

The activity allowed cadets to work as a team to accomplish a mission. It also emphasized the JROTC mission “To Become Better Citizens” by producing an awareness of the impact of litter on the environment. Cadets were also able to associate with and assist local veterans in an activity that required physical labor.

Cadets who participated in the cleanup will be recognized with the awarding of cadet command decorations for community support. For some ninth-graders, it will be their second award of that decoration in the first month of the school year.

The Adopt-A-Highway activity is a semi-annual event, with a second cleanup scheduled for the spring.