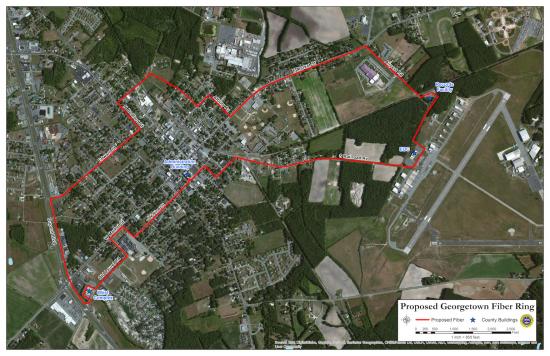 Georgetown, Del., March 10, 2015: Sussex County’s computers are about to get a turbo boost on the information superhighway, and that will mean blazing network and Internet speeds, not just for government operations, but potentially for other consumers in the Georgetown area.

County Council, at its Tuesday, March 10, 2015, meeting, awarded a five-year contract to Reston, Va.-based Broad Valley Micro Fiber Networks Inc. to install a high-speed ‘fiber ring’ in Georgetown that will increase the local government’s network connection speeds by as much as 100 times – up to 10 gigabits per second – at four facilities. It also will provide redundancy to better ensure a constant network connection for those County facilities.

The new fiber-optic line will connect the County Administrative Offices building on The Circle, the West Complex along Dupont Boulevard, and the Records Management Center and Emergency Operations Center at the Sussex County Airport. The underground line will be laid in a loop fashion, as opposed to a single line connecting each building, encircling the facilities to give them a two-way path to send and receive data over the County’s secured network.

Right now, the older single-line feeds that serve County facilities are susceptible to downtime whenever an interruption in service occurs anywhere along those lines. With the ‘fiber ring’, if an outage occurs somewhere on the loop, data will redirect on the loop to reach its destination.

Eventually, other consumers – businesses and residents alike – along the route of the fiber-optic ring could connect and pay for service, giving them state-of-the-art, high-speed access.

“With this project, the County is virtually limitless in its ability to connect our facilities to each other and to the rest of the world,” said County Administrator Todd F. Lawson. “That’s great news from an operational standpoint, allowing us to consolidate our computer systems and transfer data at the fastest speeds possible.

“But it’s even better news for our economy here in Sussex County, as this ‘fiber ring’ will give businesses and other consumers along the route another option for broadband access, and could lead to an expanded network across Sussex County down the road,” Mr. Lawson said. “That’s critical for Sussex County to be competitive in attracting and retaining employers that depend on a constant, high-speed connection to do business.”

Broad Valley was selected from three potential vendors, and was the lowest bidder on the project. The new ‘fiber ring’ will replace some older, existing connections and service the County currently utilizes for its computer networks and Internet access.

The upgrade will enable the County’s network to operate at peak performance, allowing for bandwidth-intensive technologies, such as video conferencing and faster backup of terabytes of data, said Thomas Glenn, director of the County’s Information Technology department.

“It benefits the County not only because it provides faster speeds for our operations, but it gives these County facilities redundancy and resiliency that is critical to ensuring a constant, reliable connection for the flow of information,” Mr. Glenn said.

“We are pleased to partner with the Sussex County Council, which has shown great initiative in finding ways to improve broadband infrastructure in its communities,” said Peter D. Aquino, chairman, president and CEO of Broad Valley. “Looking ahead, as we make investments in constructing the Georgetown fiber network, we expect to leverage our fiber backbone to serve other customers throughout the area.”

Construction on the fiber ring is expected to begin this spring, and be complete by fall 2015.