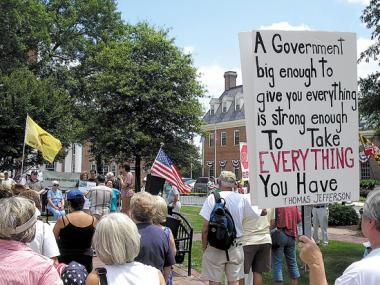 Georgetown – As part of a series of Tea Party demonstrations through out United States coinciding with the 4th of July, Delaware had four events scheduled in the State.

Two gatherings in Wilmington, one in Dover and another one in Georgetown were held on July 2 to show the discontent in the part of an ample segment of the population against the growing role and powers of the federal goverment, the added taxes, and the increase in the national debt.

Many in Georgetown had signs showing their reaction to Congressman Castle’s vote in favor of the Waxman-Markey ACES Cap-and-Trade Bill.
“He did this in spite of a flood of phone calls, emails, and letters that expressed concerns over how this bill would increase costs, harm farmers, and cost jobs in a time when few of us could afford it,” reads an article on www.delawareteaparty.org.

The increased role of goverment is viewed by many as a way to grow its powers and interfierence with the general population.

As many countries are still trying to get rid of leftover ideals from comunist regims, it appears like the United States is embracing them with a series of nationalizations of the private sector in a very covert manner.

The banking institutions, the car sector, and the health care industry, among others, are being taking over by the goverment and doesn’t seems to be many voices in the media against it.