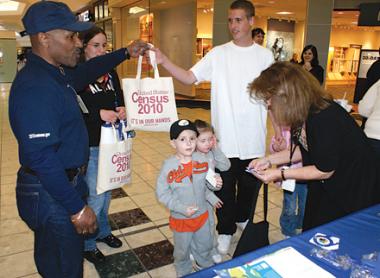 It was 3 stops at Pocomoke, Crisfield and Salisbury.

At the mall of Salisbury, the partner specialist Jacqueline Lisjuan and her team explained to the people how to fill the Census applications and give to the people goody bags to promote this campaign.

The 2010 Census Portrait of America Road Tour is part of the largest civic outreach and awareness campaign in U.S. History.

The Philadelphia Regional Road Tour vehicle, “The Constitution,” with its accompanying interactive exhibit, was on display at multiple locations on the Eastern Shore.

The tour was designed to motivate residents and encouraged them to complete and mailed back their 2010 Census form when it arrived in mailboxes March 15-17, by allowing them to see firsthand the Census form and learn how the information is used.