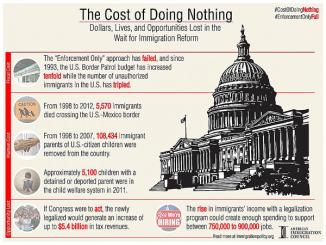 The Immigration Policy Center (IPC) releases The Cost of Doing Nothin on Immigration Reform. The fact sheet highlights the high cost of doing nothing on immigration reform legislation.

The “enforcement only” approach to immigration policy has failed to curb unauthorized immigration and has wasted taxpayer dollars while creating a slow-motion humanitarian catastrophe.

The full economic potential of unauthorized immigrants as workers, taxpayers, consumers, and entrepreneurs has been squandered because they are unable to earn legal status.

In other words, if an immigration reform legislation isn’t signed, the broken machinery of the U.S. immigration system will continue to destroy lives and families while draining the federal budget and undermining the economy.