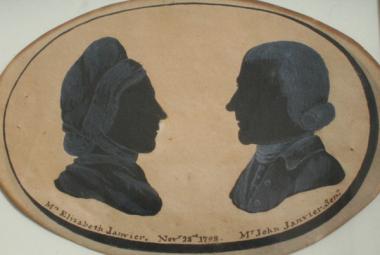 ODESSA, Del. — Sept. 8, 2009 — An inexpensive way of recording a person’s appearance before the advent of photography, silhouettes or profile portraits were highly popular in America from about 1790 to 1840.

Displayed together as a collection for the first time, the Historic Odessa Foundation’s (HOF) silhouettes are currently on display in a case exhibit – Profiles in Paper – through Oct. 18, 2009.

The exhibit displays silhouettes of the late 18th century and early 19th century residents of Cantwell’s Bridge, now Odessa. The collection includes many hollow-cut silhouettes with the Peale’s Museum stamp and some painted silhouettes created by a local Janvier family member.

In conjunction with the exhibit, the Historic Odessa Foundation is presenting a lecture on the history of silhouettes and will offer visitors the opportunity of having their profile drawn and cut:

Profiles in Paper Lecture – Wednesday, Sept.16, 2009, 7 p.m. – Brian Miller, HOF’s assistant curator, will present the history of the silhouette from ancient times and cultures, its prime in the early 19th century, its revival in the 1920s and interpretation today. The numerous methods and materials used to create profile images will be explored. Discover how the camera obscura was used to create silhouettes by artists in America and how it influenced portraiture. Attendees will have the opportunity to have their likeness preserved as a hollow-cut silhouette using a replica camera obscura. Historic Odessa Bank, 2nd and Main St., Odessa, Del. Free to the general public

Create a Silhouette – Saturday, Oct. 10, 2009 – Visitors to the Historic Houses of Odessa will have the opportunity of preserving their likeness with a silhouette portrait. Have your profile drawn and cut by an 18th century costumed itinerant silhouettist (a.k.a. Brian Miller, Historic Odessa Foundation’s assistant curator) who will be in town to create hollow-cut silhouettes using a replica camera obscura. Members free and free to general public with paid admission to the Historic Houses of Odessa.

Open from March through December, Thursday through Saturday, from 10 a.m. to 4:30 p.m., and Sunday from 1 to 4:30 p.m., the Historic Odessa Foundation offers tours to the public, families, groups and schools of its landmark properties that house the foundation’s collection of more than 4000 objects and furnishings that span an interpretive period in regional decorative arts from 1760 through 1850 and provide a backdrop for a variety of educational programs for schools that include 18th Century Cooking, the Apprenticeship System and 18th Century School Days among others. Tours are available in January and February by reservation only.