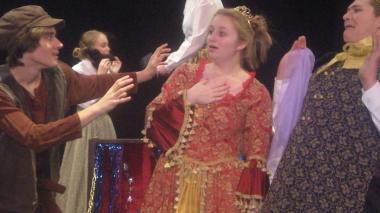 The students of the Theatre Arts Academy at Cape Henlopen High School will be featured in their Second Quarterly Performance on Thursday, January 21, at 5:30 p.m. at the brand new Cape Theatre at Cape Henlopen High School. The performance is free to the public and is a fantastic opportunity to see what the students have been working on in class and how they have learned to apply it to larger projects. The show features units of study covered within the last quarter: Level One students will perform exercises dealing with Action and Objective as well as the production number, “Too Darn Hot.” Level Three students will exhibit monologues and scenes from plays by American Playwrights, Edward Albee and Lanford Wilson. Level Two students will conclude the evening with their children’s theatre piece that has toured to Elementary Schools in the area, “The Emperor’s New Clothes.”

The Theatre Arts Academy continues to engage students in new and unexpected ways as the faculty and curriculum set higher standards than ever before and encourage the students to grow in their knowledge of the craft of performing. One student of the Academy, Katharine Ariyan said, “The theatre classes not only teach me more about acting, but they also teach me how to communicate more effectively and how to establish a sense of self confidence.”

Eight graders and Cape students are currently registering for classes within the Theatre Arts Academy for the school year beginning in September of 2010. Recently, the Theatre Arts Academy program in conjunction with Cape High School held a succession of day-long workshops dedicated to 8th graders looking into their high school selection process. After an introductory video session, the students rotated through an acting class, a tour of the building, and a performance of “Poe, Poe, Poe,” a theatrical piece performed by the Level Three Theatre Arts Academy students based on the work of Edgar Allen Poe. The students thoroughly enjoyed the entire day and were overwhelmed with everything that Cape High School had to offer.

Instructor for the Theatre Arts Academy, David Button, added, “The students bring such a high level of enthusiasm to the classroom everyday. It was even apparent with the 8th graders. It is a continual challenge – and also extremely gratifying – to teach a group of constantly engaged students who are yearning to learn something new on a daily basis.”

Take an inside look at the Theatre Arts Academy Program by viewing the Quarterly Performance in the upcoming week.