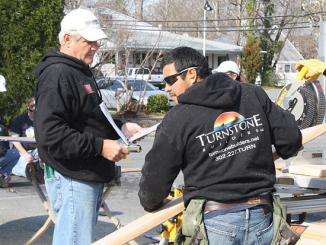 REHOBOTH BEACH – In the quest to realize the American Dream, Natina Williams is happily spending at least 250 hours on Habitat for Humanity construction sites. The sweat equity is one of the qualifications of home ownership through the nonprofit organization, which provides homes to low-income people.

Turnstone Builders just made her job a whole lot easier.

The Rehoboth Beach-based company on April 4 participated in Habitat for Humanity’s second annual Framing Frenzy, held at Ocean Atlantic Sotheby’s International Realty in Rehoboth Beach. The event’s two-fold mission: Gather as many people in one location to complete the framing of homes and raise awareness in the business community about the work of Habitat.

Williams and other future homeowners, along with more than 50 volunteers learned the tools of Turnstone’s trade.

“They were amazing, and they taught me so much, like how to hold the hammer just right so that with three bangs the nail is in,” said Williams, of Laurel.

Turnstone Builders was a natural addition to the event, said Justin Healy, co-owner and managing broker of Ocean Atlantic, which offered its considerable space off Rehoboth Avenue for the project. “They’re great builders, and we thought we could develop a good partnership in a project that seemed fun for everyone involved,” Healy said.

Kevin Gilmore, executive director of Habitat for Humanity, was grateful for the help. “We’re excited to have had a prominent builder like Turnstone join us and share their expertise,” he said. Turnstone is the first and only contract builders to have participated in the Framing Frenzy event.

“For us it was all about giving back to the community in a way that was meaningful and that represented the work that we do,” said Harvey Ryan, a managing director at Turnstone Builders, a custom-home builder that combines the sophistication of a large builder and the responsiveness and flexibility of a small custom builder to create signature homes.

Two of the three Turnstone Builders principals were at the Framing Frenzy. No strangers to arduous physical labor, they typically are seen at construction sites, overseeing teams and offering detailed explanations to homeowners.

On April 4, the volunteers were placed into five groups needed to frame a home. Each group had a specific task: building headers, cutting, assembling, measuring/marking and construction. Upon completion, the wall panels were separated into sections, loaded onto trucks and taken to Georgetown, where the frames will be completed in coming months. Dogfish Head Craft Brewery, which kicked off the annual event last year, erected a second house during the Framing Frenzy at its restaurant parking lot on Rehoboth Avenue.

At the Ocean Atlantic site, Williams was amazed at how quickly everything came together. “We did this in just a few hours with their help,” she said. “It usually takes us a month or more.”

Don Stewart, another managing director at Turnstone, said everyone enjoyed the day away from the daily routine.

“They needed people with building experience for this project,” he said, “and we were thrilled to share what we know with volunteer groups and individuals.”

For more information about Turnstone Builders, call 302-227-8876 or visit www.turnstonebuilders.net.