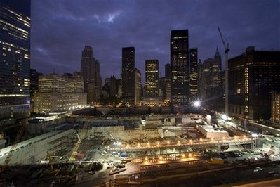 09/11/2008 7:17 AM ET: NEW YORK (AP)- As the nation pauses to mark the seventh anniversary of the Sept. 11 terrorist attacks, the spotlight from a presidential campaign and a new memorial at the Pentagon are joining the familiar rituals of remembrance on this solemn day.

In New York, four moments of silence were planned Thursday morning to commemorate the precise times that two hijacked jetliners crashed into the World Trade Center, along with the times that each tower collapsed. Services also were to be held in a field in western Pennsylvania and at the Pentagon outside Washington, where terrorists crashed two other hijacked planes.