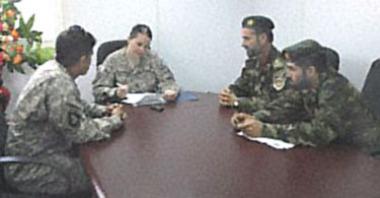 JALALABAD, Afghanistan – For some time now the U.S. military has trained Afghan forces to better hone weapons and tactical procedures. However, in the realm of public affairs the pen is mightier than the sword and that requires an entirely different kind of training.

“Public Affairs is key to communicating to everyone our military’s mission,” explains Navy Mass Communications Specialist 1st Class Krishna Jackson. “We show that it is people just like them who are contributing everyday to keeping our homeland safe. Without PA, no one but those involved would ever know what is going on.”

Jackson, a public affairs specialist serving in 82nd Sustainment Brigade, recently took it upon herself to train with one Afghan national army public affairs office to make it possible for the ANA to cover many of the same stories as the U.S., but from their point of view.

“These stories can be used to perpetuate positive coverage of the efforts of the Afghan forces to take over the security mission in Afghanistan,” Jackson said. “Winning the support of the local Afghans is a number one priority for International Security Assistance Force because if we have their support then the insurgents can’t operate freely against them and coalition forces.

“I emphasized to the ANA major and sergeant that it is essential for them to use their skills as communicators to help that mission succeed in their operating area and within their Afghan communities.”

Training with the ANA 201st Corps Garrison Support Unit PAO consisted of camera basics, products, command support, assisting the garrison with communicating positive messages to the villages in the area, working with media and minimum requirements for PAOs.

The initial intent was to assess their abilities, which were at par, Jackson said, but their equipment was not to standard. Since the garrison is relatively new, the support equipment needed is still being provided to the soldiers.

Jackson said she is currently assisting them in acquiring what they need through their supply sources. The Seaford, Del., native, added that her greatest challenge in working with foreign services is the communication barrier.

Jackson had the assistance of a linguist to translate her brief in Dari – one of the two main languages spoken in Afghanistan. Having an experienced linguist ensured everything was understood on both sides.

“I have been learning Dari myself so I could better communicate with them but I am not fluent and I cannot read or write the language,” Jackson said. “More than anything I want to see Afghanistan succeed on its own with its own government. Anything that I can do to contribute to that is worthwhile for me.”