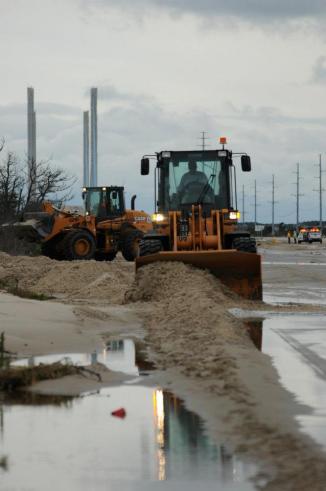 • “The men and women of Team DelDOT have been working tirelessly since before Hurricane Sandy to safeguard, and now restore, the state’s transportation network,” said Secretary Bhatt.

• Most of Delaware’s transportation system is in working order:
– traffic signals are operational
– DART transit service and ParaTransit are on normal operating schedules.
– DMV and tolling operations have resumed.

• DelDOT crews are continuing to inspect and work on approximately a dozen roads statewide that were closed due to high water, fallen trees or utility lines.

• We have nearly completed all of our bridge inspections.

Route 1 at the Indian River Inlet

• DelDOT projects that we will reopen Route 1 Sunday morning.

• RT 1 at the Indian River Inlet – especially on the northern side, this area sustained major flooding during the storm.

• Since Tuesday after the storm, crews comprised of personnel from DelDOT, DNREC, Sussex County Conservation District and the National Guard have removed almost all of this material using 25 pieces of heavy equipment.

• Most of the remaining work on the road requires a slower pace. This includes creating and cleaning storm ditches and drains, and clearing sand and debris from guard rails.

• This morning Secretary Bhatt met at the inlet with: Senator Tom Carper and Senator Chris Coons, Governor Markell, Representative John Carney, Lt Col. Becking of the Army Corps of Engineers, and Collin O’Mara, DNREC. We discussed our plans for fortifying the barrier sand dunes along RT 1 to protect the road from future erosion.

• The full details are still being worked out, however, we will be installing approximately 1,000 ft of steel sheet piling along the ocean side of RT , north of the bridge as part of our protective efforts.

This work will be done under an existing contract as soon as the necessary material can be obtained. The cost will be funded 80 percent by federal dollars.

• Before during and after the storm, the Indian River Inlet Bridge itself was not at risk. The bridge was built to withstand storm energy far in excess of what was experienced this past week.

• DelDOT crews began work on repairing the road yesterday at 9 a.m. and are hopeful the road will open sometime tomorrow.

• There is damage to a total of about 1,000 feet of road and shoulders, in various sections. DelDOT still has concerns about tidal flooding, but the work is going well.