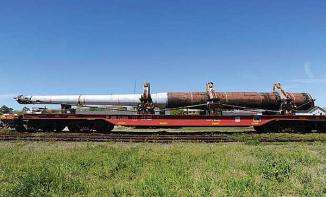 LEWES, DE – Accompanied by officials from the Fort Miles Historical Association, the train bearing the 69’ 270,000 pound cannon from the USS MISSOURI will stop for photographs in Lewes, on its way to Cape Henlopen State Park.

The train will pause for a brief time behind the Lewes Public Library and Stango Park approximately between 10:15–10:45 am Tuesday, April 17. The public is invited to gather there to view this historic icon.

One of the last original remaining guns from the battleship USS MISSOURI (BB-63), the cannon was used in the battles of Iwo Jima and Okinawa. Members of the Japanese delegation walked beneath the cannon on their way to the surrender ceremonies held on the ship on Tokyo Bay.

After its brief stop in Lewes, the cannon will be taken across the Lewes-Rehoboth canal to the State Park, where a crane will lift it onto trucks for its final stop at the new Fort Miles Military Museum. The cannon is of the size and type that was used at Fort Miles to protect against enemy invasion during WWII.

The cannon was lifted from its storage area in Norfolk, VA on April 2, where it had been scheduled to be cut apart for salvage. It was then taken across the Chesapeake Bay by barge, and then loaded onto a train for its trip to Delaware, pausing for ceremonies in Georgetown, DE on April 16.

“We are thrilled to save this amazing piece of military history and bring it to Delaware,” said Dr. Gary Wray, president of FMHA. “As the museum’s official symbol, the cannon will welcome visitors to Fort Miles for decades to come.”

Wray said a campaign is now underway to raise $500,000 for planning for the museum, and for restoration and presentation of the USS MISSOURI cannon.