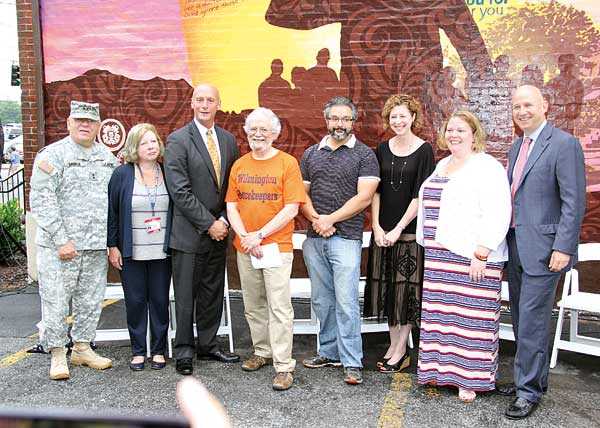 The dedication of the Veterans Freedom Mural was held on Tuesday, June 28, at Marcella’s House, 901-903 Washington Street in Wilmington (the intersection of 9th and Washington Streets). Governor Jack Markell, Secretary of State Jeff Bullock and General Frank Vavala of the Delaware National Guard were among the guests speaking at the event.

Muralist Eric Okdeh was the lead artist on the project, and facilitated workshops where artists observed and learned from his process, practicing the techniques while creating the Veterans Freedom Mural. Okdeh facilitated community engagement meetings, teaching participants how to elicit feedback and distill it into mural imagery. Participants learned how to use the parachute cloth method to create the mural and the actual installation of parachute cloth. They also learned how to create and install glass mosaic. Participants who completed the Public Art Prep Training workshop series received a non-credit certificate of completion.

About Eric Okdeh, Lead Artist
Eric Okdeh is a Philadelphia-based muralist who has been creating public art since 1998. After receiving his BFA in painting from Tyler School of Art, Eric chose to focus on public art exclusively. Since 2002, in addition to his commissioned work, Eric has taught mural making classes to children and teens throughout the city as well as inmates at SCI Graterford Prison. The classes exist as leadership, teamwork and skill building exercises that culminate in major mural projects. Eric finds that the most successful murals provide a sense of inclusion and accomplishment among its participants, empowering them to take ownership in the work. Eric has more than 80 public art commissions throughout the Philadelphia area, as well as murals in Wailuku, Hawaii, Seville, Spain, and Amman, Jordan. He has also participated in mural projects in Tucson, Arizona, and Los Angeles. His work is featured in seven books about public and mural art.

Artist Statement
Veterans Freedom Mural, Getting Back to the World, is a multidisciplinary mural project that explores a veteran’s process of transition when returning back to civilian life. The design imagery was derived from group dialogue and individual conversations with veterans, the professionals who support their transition home and community members from Wilmington.

The design depicts the silhouettes of a contemporary returning veteran greeted by a senior veteran. The two figures are connected by a ripple effect, which illustrates both proud and traumatic experiences in wartime. These ripples illuminate how veterans return fundamentally changed by the experiences of their deployment. The design also recognizes the history and importance of women in the military, highlighted by imagery of the Women’s Army Corps. The path of a military transport returning home guides the viewer through the mural’s stories, ending in the heart of a Wilmington community and family.

Getting Back to the World seeks to promote understanding of and empathy for military personnel and their experiences. This public project provides a voice to veterans as they share guidance with those returning from service and those struggling with their transition back into the community. A portion of the design is devoted to writing and testimonial quotes from veterans who were interviewed by the artist. In honor of the unique bond between all servicemen and women, there is additional space for our local vets to contribute advice and affirmations to future veterans.
—Eric Okdeh, Lead Artist of the Veterans Freedom Mural 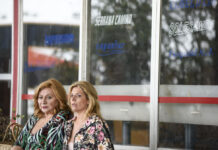