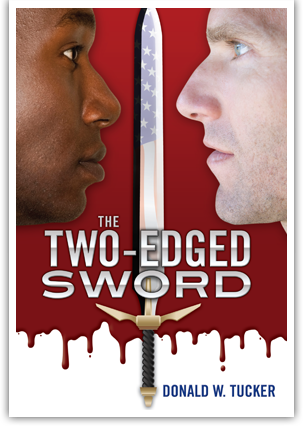 Some political pundits have tiptoed around it, while others won’t even head fake in its direction.

As the birther controversy surrounding President Barack Obama has faded with the disclosure of his long-form birth certificate, the fuel behind the fervor remains. Was the birther movement developed because of still lingering racist attitudes toward the election of an African American commander in chief?

“In a word, yes,” said Donald Tucker, a retired black Secret Service agent who protected presidents through the later years of the Civil Rights movement. “I retired in 1990 from the service, having lived through decades of being identified as black first, and Secret Service agent second. While I would have hoped that those old attitudes had died, I believe the election of a black president reawakened some of those lingering attitudes that are still bubbling below the surface.”

Tucker, author of The Two-Edged Sword (http://www.DonTuckerBooks.com), said the birther movement would never have developed if President Obama had been white.

“It seems the president is in a ‘damned if you do, damned if you don’t’ situation,” he added. “Instead of getting the well-deserved praise for being the commander in chief who was responsible for finally ridding the world of Osama Bin Laden, he was scrutinized for the number of times he said ‘me’ or ‘I’ in his address to the nation when Bin Laden’s demise was announced.”

Having served his country in different capacities for most of his life -most notably as a United States Secret Service agent during some of the toughest years of the civil rights movement- Tucker’s personal experience in government service reminded him that judgments regarding on-the-job-performance were not always unbiased.

“I overcame the racist attitudes, discrimination and label of troublemaker to fight for equality, not only for myself, but for every person in the agencies I worked for,” he said. “There were certain buzzwords that surrounded this administration tipping off race as an issue. Think about the vitriol spewed at this sitting president over inviting the rapper Common to the White House and the speculation of legitimacy of his birth certificate. Does that happen if he’s white? Would the media have even cared?”

However, Tucker knows from experience how much more difficult it is to be a trailblazer.

“I am sure he knew that the bar for him would be set a little higher, being the first black man to hold the office, but even he didn’t think that some Americans would have questioned his place of birth so stringently,” he said. “It’s almost as if they believed there was some liberal conspiracy that started when he was born to someday elevate him to the presidency. Now, if that had been written as a movie script, most studios would have laughed it off as being way too far-fetched. But some media outlets, and some Americans, bought it hook, line and sinker. To say that the president’s race had absolutely nothing to do with it is like saying a bird’s wings aren’t the reason they can fly. Looking back, I hope we can all realize exactly what fueled that campaign, and learn to avoid that pitfall in the future.”

Donald W. Tucker served nearly 25 years in the United States Secret Service. His career in law enforcement began as an undercover agent for the Federal Bureau of Narcotics (now called the DEA) and being appointed to the position of U.S. Marshal for the State of Arizona. Tucker’s journey from the ghetto on the South Side of Chicago to rising through the ranks to become one of America’s foremost federal law enforcement administrators and reformers was not easy and is chronicled in the new book The Two-Edged Sword.