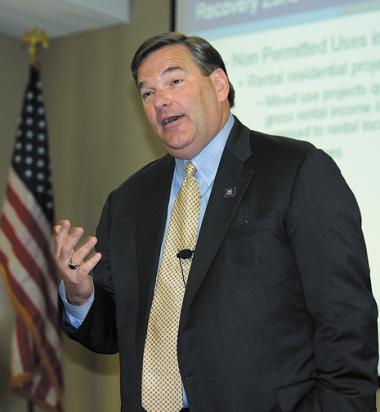 Georgetown – Alan B. Levin, Director Delaware Economic Development Office (DEDO), was the special guest at a special meeting hosted by the Georgetown Development Council on Wednesday, August 5, around noon.

“Government is not going to be the solution,” said Levin. “We don’t have to sit around waiting for the government to solve our problems.”

He mentioned that job creation is the more important issue. “We have to put America to work. Unemployment is the highest in 25 years.”

“We are not going to travel the world. Previous governors have done so. We are not doing fishing expeditions anymore.”

The Taiwan office the state of Delaware had in Asia has close recently.

Levin mentioned that the focus should be put within the state of Delaware.

Finally, his office will put a strong emphasis in Tourism, as a way to revitalize the economy of the state using an existing infrastructure.