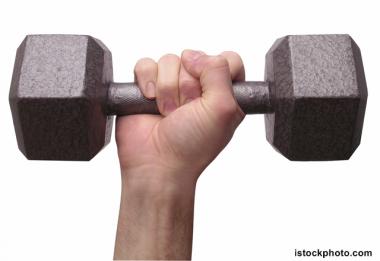 Washington, D.C. (ConCienciaNews) – Francia Cardona, a resident of Washington, D.C., has noticed that since she turned 60, her muscles are not the same; not only because she gets tired while walking, but she has also noticed that her legs and arms are thinner and smaller.

However, specialists say these symptoms are normal. One of the characteristics of aging is that muscles cease to be healthy and reduce in size, becoming thinner and making fractures more likely.

“One example is that I see my arms hanging down (flaccid). That is why I do not like to wear short shirts, even when is really hot out. It looks really ugly,” Cardona said. “It is really obvious that my muscles are not the same as before,” she said.

A group of researchers from the University of Nottingham in the United Kingdom haven proven that elderly people suffer from rapid degradation of the muscles. However, muscle training through the use of weights may help them to rejuvenate. Blood flow in the muscles may help to maintain them as well.

One of the factors which lead to this situation is the change in the diet of the elderly. Proteins that they consume are not enough to keep the muscle strong. Another factor is insulin, a hormone which is released while eating and increases between meals and at night. When there is a low supply of nutrients and hormones to the muscles, this may result in a low blood supply, which causes problems in the muscles.

The study explaining the aging process of the muscles was published this month in the American Journal of Clinical Nutrition, which compares the muscles and reactions of different groups of women and men between the ages of 25 and 60.

“We did the study before breakfast and after giving them small doses of insulin in order to increase the hormone, as if they had had cereal or a croissant for breakfast,” the study said.

Researchers focused on one of the amino acids (of which proteins are made) in order to find out how much protein went to the legs and how much did not.

“The results were clear: the younger people were able to use the insulin that they received, which increased during the night. The muscles in the older people did not produce these changes,” the study states.

“This made us think: maybe the supply rate of nutrients and hormones is lower in the elderly? This may explain what we are seeing,” said Michael Rennie, a professor at the university who conducted the study.

The research team believes that the use of weights over the course of several weeks may rejuvenate the muscles of elderly people.

“That means that I have to go to the gym or have weights at home. The only sport that I practice is walking. I think that at my age, exercising with weights gets harder and harder,” Cardona said.