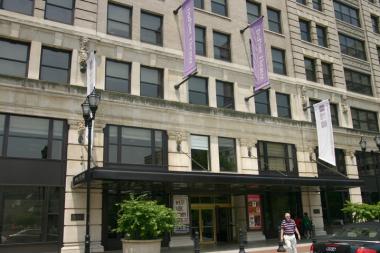 Wilmington, June 10, 2009 – The DuPont Theatre, in Wilmington, Delaware, presents national touring productions of Broadway shows and is the oldest continuously operating legitimate theatre in the country. Located inside the luxurious Hotel DuPont, the brightest stars of stage and screen have lit the Wilmington sky and graced the lovely 1,252-seat Victorian theatre since 1913.

Built in 1913, the theatre was the dream of three DuPont Company executives whose intention was to have as many of the big New York productions as possible preview their shows in Wilmington before they went to New York.

Formerly called The Playhouse, was one of the largest theatres at the time, with a stage measuring 38 feet deep and 85 feet wide.

In the 1980s, hits as “Cabaret”, “Annie”, and “Les Miserables” were performed. The theatre continued its long tradition of opening shows with the premiere of “Cat on a Hot Tin Roof’s” revival starring Kathleen Turner.

The staff of the theatre wants to open its doors to many people who are not accustomed to go to theatre. Children’s Series in 1988 marked the introduction to live theatre for thousands of students in Delaware, Pennsylvania, Maryland, and the New Jersey areas. As the children walk through the plate glass doors and enter this elegant setting with crystal chandeliers, plush carpeting, and ornate decorations, their wonder is obvious.

The 1990s ushered in a new manager, Patricia Dill, and hit shows like “Chicago”, “Cats”, “Jekyll & Hyde”, “STOMP”, and “The Secret Garden” were performed at the DuPont.

This year’s West Side Story will be performed on June 19-20 and 26-27 at 8 pm, and June 21 & 28 at 2 pm. As “Hoy en Delaware” reported in its webpage last June 4th, the DuPont Theatre and Delaware All-State Theatre announced a free sneak preview of the upcoming production of the classic Broadway musical West Side Story.

The play is going to be performed by students: Sixty kids and teens chosen in a rigorous audition process representing over thirty-five different middle and high schools from the surrounding area -including Kevin Shotwell of A.I. du Pont High School, who will be leaving Delaware soon to appear in the new Broadway production of “Bye, Bye Birdie” -. Cast members were performing during the Farmer’s Market on Rodney Square last Wednesday, June 10 at 12:30 pm. “Hoy en Delaware” was there and interviewed the two supporting actors: Cassidy (“Cassie”) Bonilla and AJ Melendez.

They perform the roles of Anita and Bernardo in West Side Story. Both are seniors at Cab Calloway School of the Arts. AJ was a finalist on the 2003 TV reality show American Juniors. They are a mighty talented twosome, and we hope our readers enjoy reading about them!”

HOY en Delaware (HD): Tell us about you. What do you do in your life? Which are your future plans?

AJ Melendez (AJ): I just graduated from high scool and I’m going to attend University of Delaware majoring in Business Marketing for Theatre of the Arts this fall.

Cassie Bonilla (C): I also graduated from high school and I’m going to attend the University of Delaware majoring in Music Management.

HD: Was it very difficult to obtain the role? What did you do?

Both: It was necessary to pass the auditions. Last January Alexander Productions and DuPont Theatre were holding auditions for West Side Story. They wanted for the roles to be young students who represented middle and high schools from the surronding areas, and well, they chose us.

HD: What are your feelings about your roles?

AJ: I love it!!! As part of my character I can relate to Bernardo, growing up in a rough neighborhood. It’s also easy to relate because of one of my brothers getting in trouble with the law.

C: Being Italian, Irish-Puerto Rican I can relate to “Anita’s” role because of the barrier of my own family being from different cultures.

HD: Who is your role model?

AJ: My mother was the motherly type that gave me the light of day. She always said to focus and have determination.When I graduated and walked down the stage I handed my mother my diploma and said “This is for you Mom, my diploma!”

HD: Today, in the sneak preview of the upcoming production you have sang pretty good, but do you think you are getting nervous the day of the premiere?

Both: Well, really we have not been nervous today at the Rodney Square but the day of the premiere we will be in the DuPont Theatre in front of 1000 spectators. And, well, we think that yes, it is impossible not to be nervous in front of 1000 people but it’s more difficult to perform in front of less people because you see each individual. Jeff Santoro, Director of West Side Story was present during the interview supporting the young actors, added “They are the gems that are just waiting to be discovered.”

HD: Do you want to say anything more for the readers of “Hoy en Delaware”, especially for the teenagers, as you, belong to the Hispanic Community?

C: Hispanics have a certain stereotype by concluding that all teenagers become pregnant and not finish their education, but now it’s changing. I am the first grandchild of 21 to graduate from high school. And my family is very proud of me. Keep your focus on education and don’t look back. Follow your dreams!

Thank you to these young singers and actors, and our thankfull to the Director of West Side Story, Jeff Santoro and the Manager of Audience Development, Diane Milburn for introducting us to the The DuPont Theatre’s backstage and for showing us the world of West Side Story, the second annual production of Delaware All-State Theatre, a division of J. Alexander Productions, an independent theatrical producer, performing at the world-famous DuPont Theatre this month.