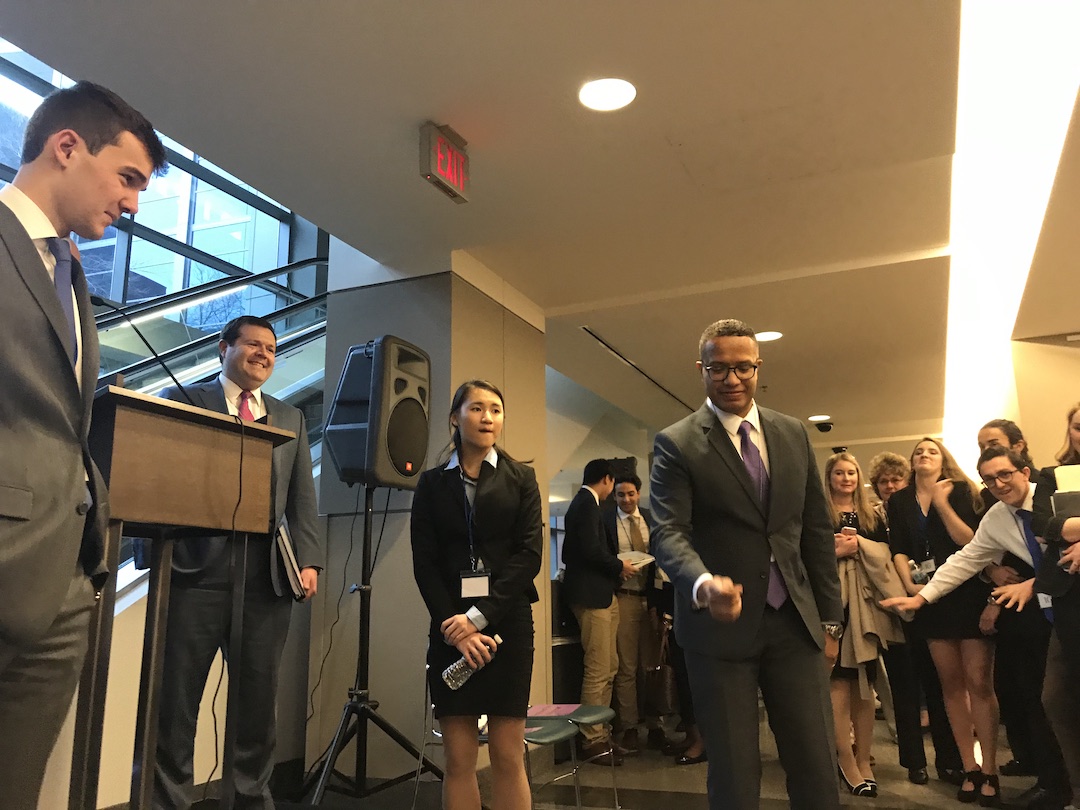 Charter School of Wilmington won the 28th annual Delaware High School Mock Trial Competition that was held on February 22 and 23, 2019 at the Leonard L. Williams Justice Center in Wilmington. The team from Wilmington Charter faced off against students from St. Elizabeth’s High School in the final round. It was a return to form for Wilmington Charter, which has won eight previous statewide Mock Trial Competitions, most recently in 2014.

Students from Wilmington Charter will now go on to represent Delaware in the National High School Mock Trial Championship in Athens, GA on May 16 – 18, 2019.

In all, 23 teams from public, private, parochial and charter schools throughout Delaware took part in this year’s two-day mock trial competition that involved more than 300 students, 28 teachers and 42 attorney advisors. The annual statewide competition is sponsored by the Delaware Law Related Education Center (DELREC), and nearly 200 members of Delaware’s legal community – including attorneys, paralegals, judges and court staffers – donated their time as judges, bailiffs and support staff for the competition.

Students on each team spent the two days arguing a simulated civil case involving Delaware corporation law that revolved around if a board of directors violated their fiduciary duties, and if a company attempting a takeover was barred from doing so due to its ties to a terrorist organization. Student teams presented opening statements, closing arguments, and questioned “witnesses.” Each team had to argue both sides of the case. In each round, students are judged on their knowledge of the law and ability to properly present their case. After four rounds, the two teams with the best scores faced each other in the final round.

The other schools that finished in the top five places, in order, after Wilmington Charter and St. Elizabeth’s were Archmere Academy, Cape Henlopen High School, and Wilmington Friends. The outstanding attorney for the final round as Neha Das of Charter. The outstanding witness was Chris Reid from St. Elizabeth’s. Students who won ceremonial gavels for winning three or more awards during the competition as either “best attorney” or “best witness” included

Morgan Whittam from Cape Henlopen and Tarron Coursey from Sussex Central. At the banquet following the competition, DELREC’s Executive Director Pat Quann and Volunteer Judge Coordinator Margie Touchton were both presented with the Pete Jones Award for their many years of service to the Delaware High Scholl Mock Trial Competition.

Organizers would like to thank the Delaware Supreme Court for their support, along with the Delaware Administrative Office of the Courts, Capitol Police, bailiffs and security officers at the Leonard Williams Justice Center for providing assistance during the two-day event. Other sponsors included Grotto Pizza and the Delaware Bar Foundation, which donated lunch for the students and Reliable of Wilmington that provided document services. Organizers also expressed their deep appreciation to the Delaware Bench and Bar, and the Delaware Paralegal Association, for providing many of the volunteers that helped organize and operate the competition.

Photo: Courtesy of the Delaware Administrative Office of the Courts

Photo Caption: Mock Trial Committee Co-Chair Christopher Griffiths, Esq. (Center) flips a coin to determine which team will be the plaintiff and which team will be the defense as Annabelle Ryu (Center left) the team captain for Wilmington Charter School, Mock Trial Co-Chair Jason Jowers Esq. (Center left behind podium) and Brian Millard (Left), the team captain from St. Elizabeth’s looks on.