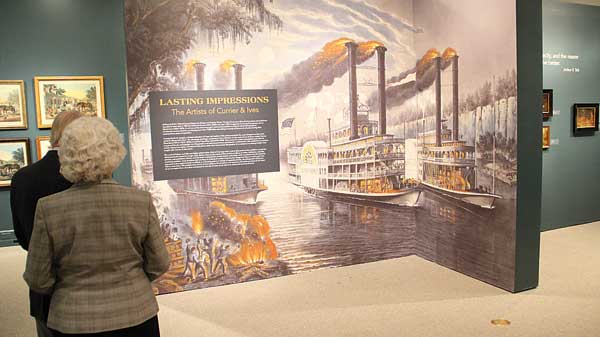 Winterthur Museum, Garden & Library announces Lasting Impressions: The Artists of Currier & Ives, an exhibition of some of today’s most sought-after works that will explore the role of Frances (“Fanny”) Bond Palmer (1812 – 1876) and Arthur Fitzwilliam Tait (1819 – 1905), two of the most prolific artists for the iconic publisher of Christmas cards and Americana, September 17, 2016 — January 8, 2017.

Perhaps best known today for their enchanting Christmas cards, Currier & Ives became synonymous with idealized images of 19th-century American home life after opening in 1834. They created and mass distributed for the first time colorful lithographs that ordinary citizens could display in their homes, eventually producing more than 1 million lithographs with 7,500 titles. Their work is widely regarded as one of the greatest pictorial recordings of 19th-century America.

Through the more than 40 selected works of art along with multimedia installations, Lasting Impressions will explore the work of Palmer and Tait in an art world where both artist and publisher invited Americans to reconsider their notions of artistic creation. Among the many recognizable works that will be on display are: The Champions of the Mississippi. “A Race for the Buckhorns“; The “Lightning Express” Trains. “Leaving the Junction”; American Express Train; The Life of a Hunter. “A Tight Fix”; “Wooding Up” on the Mississippi; Preparing for Market; and Life on the Prairie: The Buffalo Hunt. 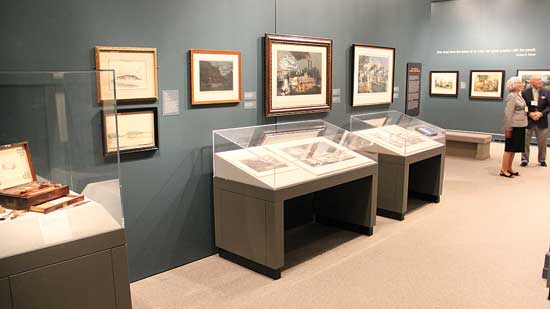 “Currier & Ives became synonymous with much more than just art depicting 19th-century life in America. It encapsulated the very idea of the American way of life,” said Stephanie Delamaire, Winterthur Associate Curator of Fine Arts and Curator of Lasting Impressions. “By chronicling the history of the period in their distinctively unique style, their prints have become a touchstone for people everywhere of what it meant to live in ‘white picket fence’ America.”

In association with Currier & Ives, Palmer and Tait produced some of today’s most sought-after prints: the delicately colored Long Island sporting scenes drawn on stone by Palmer from her own sketches; Tait’s vibrant depictions of animals observed up-close in the Adirondacks of northern New York; and Palmer’s dramatic nocturne landscapes evocative of the era’s fascination with the power of steam on land and water.

Palmer’s work at Currier & Ives remains significant for her talent and integral role as a designer and artist at the firm. She produced images that have become icons of 19th-century America, such as The Champions of the Mississippi. “A Race for the Buckhorns” and The “Lightning Express” Trains. “Leaving the Junction.” While famous for her picturesque prints, she is perhaps most remarkable as the only woman at the time to have successfully built a career in the field.

Palmer and her husband first worked together at F. & S. Palmer lithographers in England. After moving to New York in 1844, she opened her own workshop and worked with Currier & Ives as an independent contractor. When she wasn’t producing prints for Currier & Ives, Palmer trained men in the technique that had brought her so much success.

“I think Fanny Palmer was a fascinating artist and woman,” said Delamaire. “She wasn’t just a staff ‘hand’, or someone implementing the ideas and drawings of others. She created original designs and art, which was quite a rarity for a woman at the time.”

Tait, who emigrated from London to New York in the 1850s, found particular success in reproducing his paintings as lithographs and chromolithographs, a kind of reproduction lithography that involved multiple printing inks and the use of screens to imitate the surface of a painting on paper. Tait established himself through collaborations with Currier & Ives in the production of sporting scenes, as well as animal paintings observed close-up in nature. Later, he worked with Louis Prang, the famous Boston publisher who specialized in chromolithographs.

In addition to the collection of Palmer and Tait’s prints, the exhibition will feature several multimedia installations, including a video documenting the history of Currier & Ives, and interactive touch-screens encouraging the viewer to explore conservation findings and physical evidence of the artistic process. As visitors compare their reactions to the exhibition prints and the images on the touch-screens, they will be able to identify traces of the lithographic process and exercise their judgment as instant “connoisseurs” of Currier & Ives prints.

Lasting Impressions will be a part of Winterthur’s annual Yuletide at Winterthur tour, November 19, 2016 — January 8, 2017.