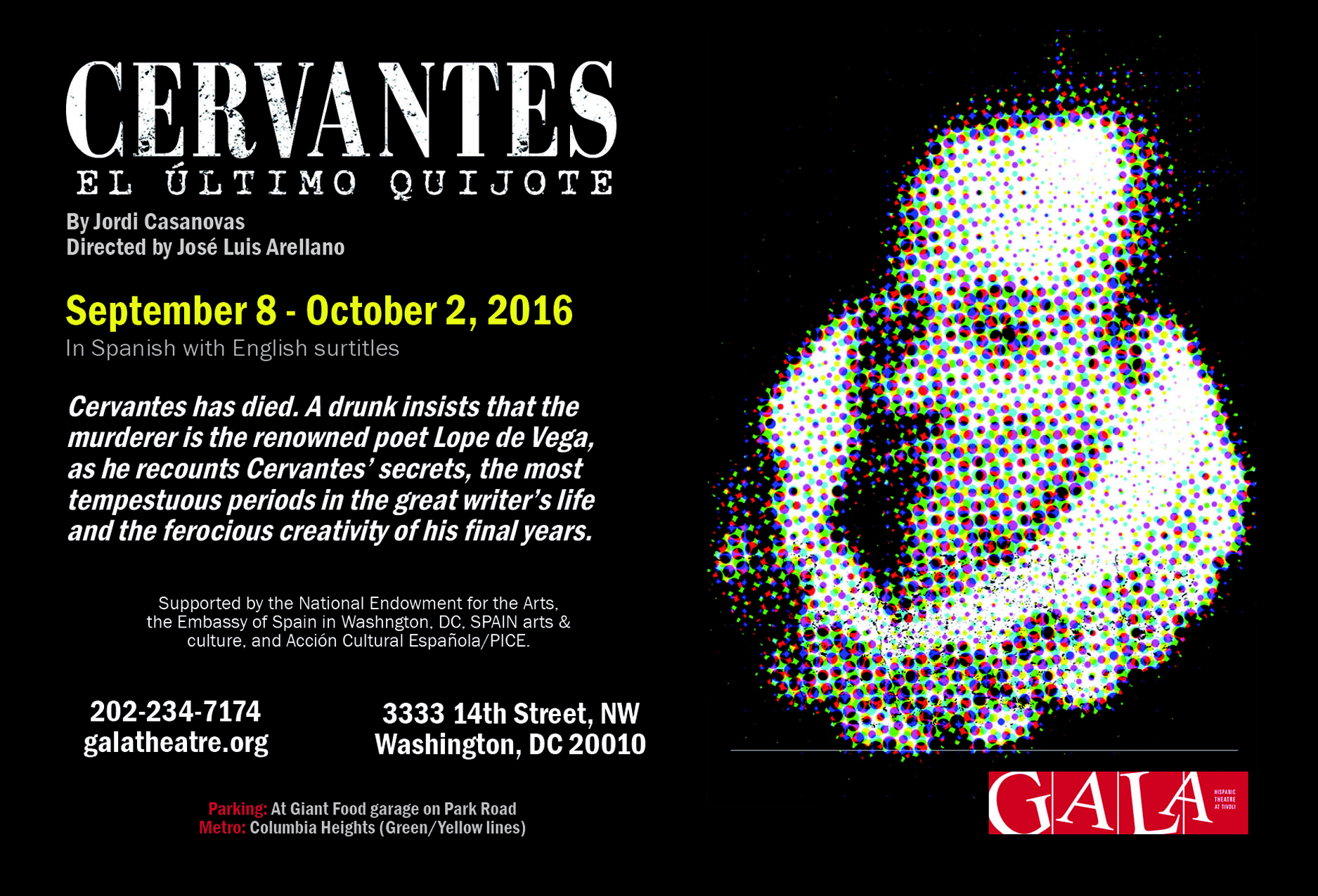 Season Begins with Cervantes and Lope de Vega on Stage

Washington, DC – GALA Hispanic Theatre enters its fifth decade by commemorating 400 years after the death of Miguel de Cervantes Saavedra with the world premiere of Cervantes: The Last Quixote by Jordi Casanovas, which was commissioned by GALA. Directed by 2016 Helen Hayes Award winner José Luis Arellano from Spain, Cervantes: The Last Quixote is performed in Spanish with English surtitles from September 8 through October 2, 2016 at GALA Theatre, 3333 14th Street, NW, Washington, D.C. The theater is one block from the Columbia Heights metro station on the Green/Yellow lines. Discounted parking is available behind the theater at the Giant Food garage.

In this new play of mystery and intrigue, Cervantes has died in the street. A drunk insists that the man who killed him is the renowned poet Lope de Vega. In Casanovas’ tale, the same man recounts the secrets Cervantes shared with him, revealing the most tempestuous period in the great writer’s life and the unbridled creativity of his final years.

Press Night and Noche de GALA is Saturday, September 10, under the gracious patronage of the Ambassador of Spain Ramón Gil-Casares. This production is supported in part by the Embassy of Spain in Washington, DC, SPAIN arts & culture, Acción Cultural Española through its Programa de Internacionalización de la Cultura Española (ACE/PICE), the National Endowment for the Arts, and the DC Commission on the Arts and Humanities.

Cervantes has died in the street and a drunk insists that the man who killed him is the renowned poet Lope de Vega. This same man recounts the secrets Cervantes shared with him, revealing the most tempestuous periods in the great writer’s life and the furious creativity of his final years.

In Spanish with English subtitles.

When?: SHOW TIMES
Thursday, Friday and Saturdays at 8 pm
Sundays at 2 pm

Where?: At Gala Theatre

Tickets in person: Our Box Office window is open from 5 to 9 pm on PERFORMANCE DAYS ONLY. A $4 flat rate per credit card transaction; no fees if paying in cash.

METRO: We are one block from the Columbia Heights station (green/yellow lines). An easy walk!

PARKING: Park in the Giant market garage around the corner on Park Road and get your ticket stamped at the theatre for a discount ($4 flat rate charge after 5 pm).

EASY TO FOLLOW:  Our performances celebrate Latino and Spanish culture and are in Spanish, but we project simultaneous translation on a screen above the stage (surtitles) for our English speaking audience. Printed programs are in English.

Miguel de Cervantes Saavedra (1547-1616) was a Spanish novelist, playwright, and poet. Regarded by many as the Spanish contemporary of William Shakespeare and a fellow literary genius, he has been attributed with the creation of the first modern novel: Don Quijote de la Mancha (1602), which brought to life the most famous figure in Spanish literature. While Cervantes’ reputation rests almost entirely on his portrait of the knight of La Mancha, his literary production was considerable and he left a treasure in the form of entremeses or interludes.

Cervantes began his literary career in Andalusía in 1580. According to the author himself, he wrote 20 to 30 plays, but only two remain extant, one of which is Los Tratos de Argel (1580), based on his experiences as a Moorish captive. His first major work was La Galatea (1585), a pastoral romance. Aside from his plays, his most ambitious work in verse was Viaje del parnaso (1614). Novelas ejemplares (1613), a collection of short stories, contained some of his best prose work regarding love, idealism, gypsy life, madmen, and talking dogs.

The date recorded for the deaths of both Cervantes and Shakespeare is April 23, 1616. However, Cervantes died 10 days earlier than his English contemporary. The different dates are explained by the distinct calendars used by the two countries at that time. England used the Julian calendar, while Spain had already adopted the Gregorian calendar.

Jordi Casanovas is a Catalan playwright and director who has written more than 30 plays, among which are Una história catalán, Un hombre con gafas de pasta, Cena con batalla, La Revolución, Lena Woyzeck, La Ruina, City / Sincity, and Wolfenstein. His most recent play, Port Arthu, just premiered in Barcelona; Un hombre con gafas de pasta is playing in Buenos Aires and Milan; and Idiota is playing in Mexico. Among his awards are the 2005 Alcoy Prize for Beckenbauer, 2006 Eduardo Escalante Award for Estralls, 2007 Barcelona Critics Award for his trilogy Wolfenstein, Tetris and City / Sincity, 2009 Butaca Theatre Award for Best New Play for La Revolución, and the 2012 Barcelona Theatre Award for Patria. He teaches playwrighting at the Institut del Teatre in Barcelona, and is the founder and director of the theater company FlyHard.

Cervantes: The Last Quixote is directed by José Luis Arellano, an acclaimed stage and television director from Madrid who won the 2016 Helen Hayes Award for Outstanding Direction of Yerma at GALA. Since 2009, he has directed El caballero de Olmedo, Ay, Carmela! and Cabaret Barroco, among others, at GALA. He is the director of the of the Theater School of the City of Parla and co-founder of La Joven Compañia, which is in residence at the Teatro Conde Duque in Madrid.

Featured in the cast from Madrid, Spain are Oscar de la Fuente as Cervantes; Eugenio Villota as Lope de Vega; and Samy Khlalil as Martín. De la Fuente appeared with Mario Vargas Llosa in Los cuentos de la peste at the Teatro Español and was recently seen in Los hermanos Karamazov at the Teatro Valle- Inclán of the Centro Dramático Nacional. Villota also appeared in Los hermanos Karamazov at the Teatro Valle-Inclán and in El lindo Don Diego at the Compañía Nacional de Teatro Clásico. Khlalil appeared in Fuenteovejuna with La Joven Compañia and in the television series “El Príncipe”, which is currently on Univision in the United States.

Also appearing in Cervantes: The Last Quixote are New York actors Eric Robledo from Mexico, who appeared in Yerma last season, and Soraya Padrao from Spain, who is making her first appearance at GALA and was seen in Burundanga at Repertorio Español; and GALA company members Erick Sotomayor from Mexico, Luz Nicolás from Spain, and José Antonio González from Cuba. Sotomayor and González appeared last season in Crónica de una muerte anunciada; and Nicolás in Yerma and Señorita y Madame: The Secret War of Elizabeth Arden and Helena Rubinstein.

Scenic and Costume designs are by Silvia de Marta from Madrid, who won a 2016 Helen Hayes Award for Outstanding Set Design for Yerma. Lighting design is by Christopher Annas-Lee, who designed El Paso Blue and received a 2016 Helen Hayes Award for Outstanding Lighting Design for Yerma. Projections Design is by Álvaro Luna who designed for Yerma and Sound Design is by April Sturdivant. Composer is Mariano Vales, who wrote music and lyrics for Las Polacas: The Jewish Girls of Buenos Aires, which was nominated for a 2016 Helen Hayes Award for Outstanding Musical. Properties are by Alicia Tessari, who designed for Crónica de una muerte anunciada and Los empeños de una casa. Nelly Díaz-Rodríguez is Stage Manager. Lena Salins is Production Manager, Reuben Rosenthal is Technical Director, and Hugo Medrano is Producer.