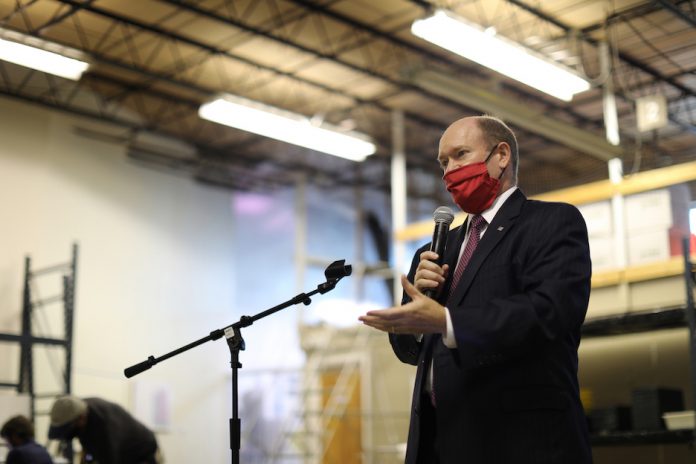 Before heading to Washington, U.S. Sen. Chris Coons (D-Del.) addresses a group of advocates working to reduce recidivism and like-minded business leaders at Second Chance Farms in Wilmington, Delaware, July 20, 2020. Coons talked about his work as an original cosponsor of the revised First Step Act of 2018 and provided details of the Driving for Opportunity Act, a bill introduced by Sen. Coons and Sen. Roger Wicker (R-Miss.) this month. This bipartisan bill aims to create incentives to stop debt-based driver’s license suspensions. Nationwide, at least 11 million people have their driver’s licenses suspended because they cannot pay fines or fees, not for any public safety reasons. These suspensions make it harder for Delawareans to commute to work to pay off the debts and places an unnecessary burden on the police to enforce suspensions, especially putting officers and citizens at increased risk of infection during a pandemic. (Photo by Office of U.S. Sen. Chris Coons/Released).