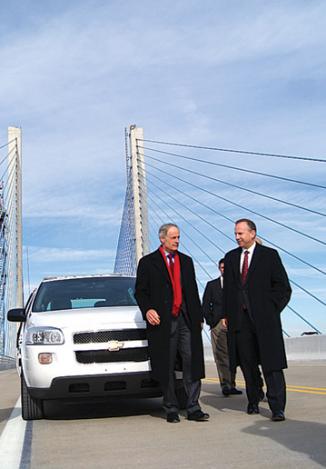 To view photos about the opening event follow this link:
http://www.shutterfly.com/pro/HOYenDE/Events
(Look for the album: Indian River Inlet Brige Opening)

At a ceremony held on Friday, January 20, the Indian River Inlet Bridge was officially open to passenger traffic.

Governor Jack Markell and senator Tom Carper drove the first passenger vehicle over the bridge a little after noon.

Effective on January 20, one lane of southbound traffic will be open. In a few days, one northbound lane will be open to vehicular traffic as well. All four lanes, pedestrian and bikeway are expected to open during the spring.

The $150 million bridge was erected by Skanska Southeast under a design-build contract with DelDOT. Sixty Delaware businesses have been suppliers to the project.