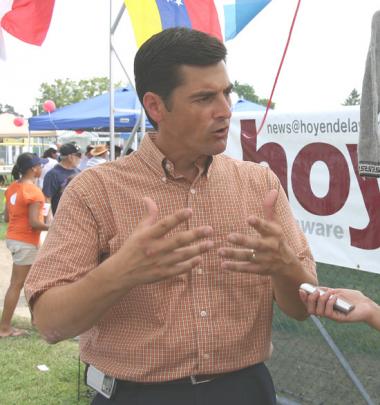 In 2009, CRI launched both DelawareSpends.com and SunlightOnSchools.org, two open government tools that have become the most comprehensive resource for the public to see how the government is spending taxpayer dollars.

With the addition of Fink, CRI will build on the momentum from 2009 to brandish a louder, broader voice in defense of Delaware’s taxpayers.

Commenting on CRI’s growth, Barrett Kidner, Chairman and CEO stated, “Shaun’s experience in the private sector, coupled with his time in the trenches as a community leader has given him the tools and know-how to expand the organization’s capabilities in communicating with citizens, the media and elected officials alike.”

Fink comes to CRI from the construction industry where he served as part-owner and superintendent of a firm since 2002. He has also worked in both the industrial and financial sectors, contributing to over a decade of leadership and management experience. Community involvement is very important to Shaun, and he is active in many ways ranging from Little League, to helping those in need, to membership in civic organizations.

“CRI is committed to helping ensure the economic viability of the state of Delaware. With an estimated $300 million budget shortfall, now is the time to increase the visibility of the Caesar Rodney Institute. Now is the time to advance the message of a competitive, free-market economy with limited government interference and low taxes. What has allowed us to live up to our name as the ‘First State’ is the initiative and hard work of our citizens. That is what makes us great,” Fink said.

“As much as I am worried about the current state of our state, I am excited about the prospect of offering solutions to Delawareans. Through policy research, investigative reports, government relations and public outreach, we can and will effectively show our fellow citizens that there is a better way than the status quo.” he continued.

Fink resides in Millsboro with his wife and four children.