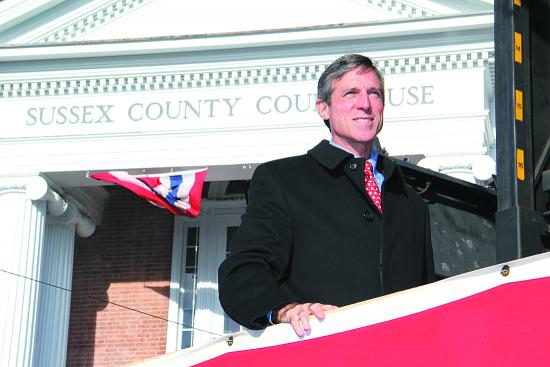 A couple Sundays ago, I was on the boardwalk in Rehoboth Beach for the Special Olympics Polar Bear Plunge. As usual, there was no escaping the cold. The air was 36 degrees, and the ocean was just barely warmer at 37 degrees.

Despite the cold, 3,325 people gathered on the beach and took the plunge. Collectively, they raised $780,000 to help Special Olympics Delaware continue serving the needs of Delawareans with disabilities.

The Polar Bear Plunge is one of my favorite annual traditions in Sussex County, and one of many reasons Delaware’s beach communities are so special.

Every year, 7 million people come to Delaware to be part of these communities. They spend time on the beaches, eat at restaurants, and shop at the local businesses that give these towns their unique character.

Delaware relies on these visitors to support the local economy. Tourism is a $2.7 billion industry in eastern Sussex, and supports close to 60,000 jobs. And at the center of all that activity are the beaches, bays, and wildlife that Delaware is so blessed to have.

That’s why I was disappointed and very concerned by the Obama Administration’s proposal to allow offshore oil drilling in the Atlantic.

We know what can happen if something goes wrong. There are 1,000 miles of coastline in the Gulf that have still not fully recovered, either economically or environmentally, from the BP oil spill in 2010. That’s almost the length of the entire Eastern Seaboard. And the regulations that the Administration is developing to make offshore drilling safer are still not finished.

That’s why last August I joined 35 of my colleagues in the U.S. House of Representatives on a letter to the Department of the Interior asking that the waters off the Atlantic coast not be opened up for oil and natural gas drilling.

The fact is, offshore drilling in the Atlantic is not only risky it’s — unnecessary. The United States’ domestic energy production is at its highest point in decades, and increases in onshore production of oil and natural gas have made energy less expensive.

Now is not the time to make risky decisions with outdated regulations. We should take this opportunity to focus on the future. I believe we can do that through investments in alternative energy sources.

It’s the right decision for the environment. Delaware, and especially our coastal communities, are vulnerable to the impacts of climate change. We need to take this challenge seriously, and alternative energy sources are an important part of that effort.

One area where we can certainly do more, particularly in Delaware, is offshore wind. Last Congress, I co-sponsored the Incentivizing Offshore Wind Power Act, which would help companies get financing for wind power production in the Atlantic.

During my first campaign for Congress five years ago, I spoke often about the importance of moving away from fossil fuels and toward cleaner sources of energy that support good paying middle class jobs while protecting the environment.

I believe that goal is even more important today. Unfortunately, the Administration’s proposal takes us in the opposite direction, and poses significant risks to the towns and natural resources that make our coastal communities so special. I don’t believe drilling off the Atlantic coast is in the best interest of the state of Delaware or the country, and as your member of Congress, I’ll continue to oppose it.