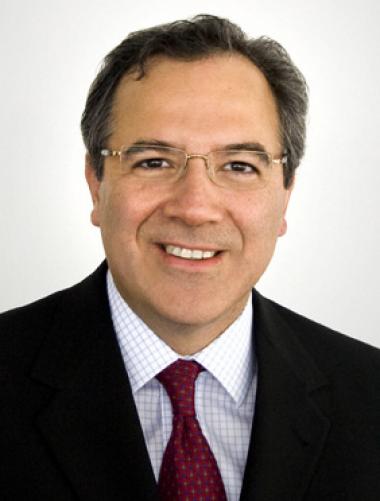 (Louis Caldera is a Senior Fellow at the Center for American Progress, where he writes and contributes on higher education, national security and issues affecting Hispanic Americans. Louis has had a distinguished 30-year public service career serving at the local, state and national levels as a soldier, lawyer, legislator, high-ranking government official, university president and law professor.)

HOY EN DELAWARE: Do you think this annual meeting between USA, Canada and Mexico interests to ordinary people?

LOUIS CALDERA: Yes. These summits are important to domestic audiences at the individual citizen level, Mexicans in Mexico and Hispanics in the US, certainly; they’re also important to global elites whose interests are impacted by the quality of this relationship. Domestically, it is important for both Presidents to be seen by their respective citizens developing close personal ties with the other and managing a critical bilateral relationship that is confronting numerous pressing issues, including immigration, economic recovery and integration, environmental and energy concerns, counter-drug trafficking efforts, and an effective flu pandemic response.

(HD): In your opinion are these annual meetings which started four years ago, good to build on ties a way for neighboring countries?

(LC): A standing meeting gives each country the opportunity to work face to face on long standing issues that are already on the table . It increases the accountability for progress on such issues over time. If they only get together on extraordinary occasions, the meetings might not occur for years and then there is pressure to announce big, headline grabbing initiatives for which there is afterwards sometimes little in-progress follow-up until the next set of leaders announce their new initiatives, and little actually ever gets done. The annual meeting is more symbolic of a mature, long term relationship that systematically addresses issues of mutual concern.

(HD):In which measure this meeting is under the expectatives signed in The North American Free Trade Agreement?

(LC): Though the gathering came about in relation to Nafta, it is now much broader than that and includes bilateral as well as multilateral issues. Certainly issues central to Nafta — Mexican truck access in the US, and new Canadian visa restrictions, are on the table, but other economic issues, such as cooperation in global economic recovery and charting a new financial regulatory structure are as well.

(HD): Will serve this meeting to highlight deed differences particularly on trade and immigration? and Do you think these differences (trade, immigration…) will be resolved in the whirlwind meetings?

(LC): No issue will be concretely solved because they are too complex and not capable of quick and easy solution, but progress will be made. The Presidents will in certain cases make breakthroughs or reach agreement on approaches to issues they next wish their advisors to continue to pursue in the months to come, They thereby set the wheels in motion toward solving the particular issue over time. through a substantive, working partnership that never quite ends, but rather moves on to the next issue that is impeding progress.

(HD):About Mexicans entering Canada, will have tensions focused on this issue? (Remember that the Canadian government complained because many Mexicans are fraudulently claiming political asylum in Canada. So Canada announced last month that it would begin requiring Mexican citizens to secure visas before entering the country. The Mexicans struck back with an announcement that Canadian diplomats and government officials would now require visas to enter Mexico. Although some angry Mexican lawmakers urged President Felipe Calderón to require visas for all Canadian visitors, Mr. Calderón held off, not wanting to damage Mexico’s tourism industry).

(LC): The Canadian Prime Minister must satisfy his Canadian constituents first and foremost. Though Mexico has made it’s positron clear, it will be hard and unlikely — though not impossible — for Canada to modify its position.

(HD): Do you think this meeting change the actual relationship between USA and Mexico?

(LC): Every set of new US and Mexican presidents must establish a personal relationship among themselves, and re-affirm the relationship between their respective countries. So the meeting is important even if all it accomplishes is reaffirm for all who are watching that Mexico is important to the US. Domestically, President Obama has too much at stake right now to announce a lot of new initiatives, but he and his advisors know that Mexico related issues — immigration, flu, counterdrug and economic and environmental — are coming up fast and that they need to be working on them now.

(HD): President Obama and his Mexican and Canadian counterparts were expected to touch on a broad range of issues including climate change and immigration, the economic crisis, the swine flu pandemic and the battle against illegal drugs but there are many conflictive issues for only two days of meeting. How does it solve this problem?

(LC): The meeting will be productive if they can agree on what approaches to take on the specific issues where there is common ground and public support for action and then delegate the work to their most trusted advisers. From the public’s perspective, it is a whirlwind of meetings and it’s impossible to see how real work gets done, but it does, behind the scenes, both before and after the summit. In this way progress is made — not on everything, but on some things.

(HD): In your opinion why does President Calderon refuse reviewing some aspects of the climate change program with his counterparts?

(LC): The world’s developing countries and the newly industrialized countries like Mexico see climate change challenge differently than the industrialized countries like the US. They are concerned to a certain extent with climate change, but are also concerned about equity and development and want to be able to grow their economies and per capita GDP rapidly without being held back by carbon restrictions the developed world never had to deal with when they were developing.

(HD): Some additional information for our readers, in which consists the main tips of The North American Free Trade Agreement?

(LC): While the possibility of other free-trade agreements are on hold, Nafta appears to be safe from revision for now. Mexico’s and the US’s future is increasingly interdependent as is evident fro there number and complexity of the issues touching them today that neither side can solve without the cooperation of the other.

(HD): Do you want to add anything else for our readers (our newspaper Hoy en Delaware is a bilingual newspaper distributed in all the state of Delaware)?

(LC): The Obama administration has gone out of its way to show support for Calderon’s efforts, particularly against drug traffickers, and would like for Mexico to be a strong ally in the region and in the international arena.